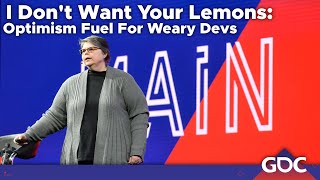 This inspirational talk from 2019 GDC Main Stage speaker Laralyn McWilliams provides practical tools and techniques to stay positive and creative in game development despite the bumps (and craters) in the road, drawn from the experiences of fellow developers with 15+ years in the business. 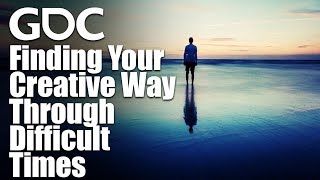 In this 2018 GDC talk, game designer Laralyn McWilliams provides tools to recognize when you're deep in the well of darkness and methods to help reclaim your creativity, discussing her experience going through multiple rounds of cancer treatment.

Every working designer has them - unique techniques or "tricks" that they use when crafting gameplay. Sure, there's the general game design wisdom that everyone agrees on and can be found in many a game design book, but experienced game designers often have very specific rules that are personal to them, techniques that not everyone knows about or even agrees with. This fast-paced and energizing session puts five experienced game designers up on stage for 10 minutes each to share one game design "trick" that they use to make compelling gameplay. They will discuss experiences using these "tricks" on past projects in detail, helping the audience understand where the rules apply and where they may not. This session will expand your understanding of how to design games, while illuminating the unique ways some remarkable creators approach the craft of game design. Rating: 67% Excellent, 22% Good

How a system sounds on paper is very different from how it feels to experience it as a player, which is in turn very different from how it performs over time against a large, live audience. Discovering what works and what doesn't before you launch the game is invaluable. Modeling your systems is one way to get a sense of how they will perform once they're live. This talk goes through both basic and new ways to model pacing, cadence and mechanics. We'll show examples of modeling action game mechanics via a board game and a complete model of reward/monetization cadence via a Unity simulator. Using tools like these, we can not only better understand the player's experience, but also help foster a key shift in metrics and tools to focus both on what makes money AND what makes a positive, fun play experience. Rating: 27% Excellent, 55% Good

Make Your Game The Happiest Place On Earth (2014)

Using the changes to the Disneyland ticket system over the years as an example, this talk sets out to show that valuing customer happiness and retention over other metrics is the key to a game players enjoy enough to spend money in.

I discussed game design careers with a high school class, giving tips for how to think about the games they play more critically, and tools they could use to start building skills.

Inspired by the #1ReasonWhy and #1ReasonToBe hashtag discussion, join us for a rapid, fun microtalk-style celebration and exploration of what it means to be a woman in games. Each panelist will share their experience, its highs and lows, and explore a vision for a future industry that is inclusive for all. Hosted by Brenda Romero and Leigh Alexander, panelists include Anna Kipnis (Lead Programmer at Double Fine), Colleen Macklin (Associate Professor, Parsons The New School), Deirdra "Squinky" Kiai (Developer of Dominique Pamplemoose), and Lauren Scott (Game Designer, UCSC). Rating: 4.8

Opinions Versus Metrics: Which Matter Most? (2014)

Which is the more accurate representation of "the truth": what players say in forums, or what you see in game metrics? Using examples from many games, this lecture describes why both are important, and how to use the information they provide.

Three designers take on the challenge: create the most "evil" design for a free-to-play version of Minecraft.

Do you want happy players or paying players? Do you want short-term revenue gain or long-term retention? Are these things mutually exclusive? "Metrics Aren't the Message: It's About Happy Players" takes attendees through a series of events that changed the way one developer looks at metrics, monetization and retention. Based on examples from years of experience with free-to-play design, development and live game management, we'll take a look at ways to include player engagement. Let's move beyond the numbers to better understand how emotions drive player decisions, and the effect these emotions have on long- and short-term business goals. Rating: 4.81/5

Why Designers Should Care About Metrics (2012)

Metrics and monetization have a bad reputation, mostly because they hung out with the wrong crowd. We started hearing about both concepts not from their roots in MMOs but as a part of the development philosophy of specific social game companies that were also notorious for a decision-making process that didn't include designers. In fact, metrics provide useful tools for designers that become a part of the toolbox for creating great games that players love. Whether it's for a live game or a sequel, someone's going to be looking at the numbers and making decisions about what players want and how to create a more financially successful game. You can lead those decisions, or you can stand by while someone else makes them. This talk is intended both to educate designers and to arm them for debates with marketing, business development, product managers and execs about design choices. Rating: 4.09/5

Get Over Yourself: Making Someone Else’s Game (2011)

This session will inspire designers to go beyond their own tastes as players and creators, to make great games regardless of the audience. It centers on specific examples and methods for learning about your players, and viewing the world--and your game--from their perspective. By shifting the focus from the developer to the player, and from the specific game to the art of entertaining with interactive media, designers can find inspiration and joy in their craft. Rating: 4.43/5

Get Over Yourself: Making Someone Else’s Game (2011)

This session will inspire designers to go beyond their own tastes as players and creators, to make great games regardless of the audience. It centers on specific examples and methods for learning about your players, and viewing the world--and your game--from their perspective. By shifting the focus from the developer to the player, and from the specific game to the art of entertaining with interactive media, designers can find inspiration and joy in their craft. Rating: 4.72/5

Intuition vs. Metrics: How Social Game Design Has Evolved (2011)

A rousing, quick-paced presentation presenting the two "sides" of game design--intuition and metrics. The goal was to show both were important, and the ways each approach informs the other.

Intuition vs. Metrics: How Social Game Design Has Evolved (2011, with Brenda Romero)

A rousing, quick-paced presentation presenting the two "sides" of game design--intuition and metrics. The goal was to show both were important, and the ways each approach informs the other. Rating: 4.44/5

The use of metrics in online games was a relatively new topic in 2010. This talk presented ways to use that data to effect change in your product that directly addressed customer satisfaction and retention.

This tightly-focused two hour session broke attendees into groups to develop a quick concept around a core idea. The groups then had to present their concepts--the actual point of the exercise. What are the four sentences you can present that convey the heart of the play experience?

RPGs and MMOs rely on leveling up, stat increases, and item unlocking for the carrots that retain players. Multiplayer shooters and fighting games rely on competition and a skill ramp that encourages players to fight for positioning on ladders and leader boards. Traditional single-player games rely on new areas, new abilities, and storylines to encourage continued play. Yet all of these things are forms of progression. This presentation presents examples of alternative player progression, using games like Free Realms, Pogo and Halo for development examples. It compares and contrasts progression at both ends of the spectrum to develop a methodology that steps you through the usual and some unusual choices in progression. It also takes a critical look at how casual games, social games and large brands are innovating in progression. Rating: 4.5

One of the benefits of creating an online game is the ability to adapt to user preferences, even after your product has launched. But instrumenting a game -- implementing changes to the play mechanic, managing a game or virtual world's reward system and difficulty level, adding partners, and even changing a pricing strategy -- is a relatively unknown area of product management. With an online product, going live is just the mid-point in a product's lifespan. This lecture will reveal the nuances of collecting player metrics, data mining, and other areas of online analytics. Understand the second, third, and fourth chance you get with online and make the most of the web's ability to instrument your customer's online experience. Rating: 4.31/5

Challenges In Designing A Casual MMO (2009)

Creating Free Realms was challenging for many reasons, but one of the most difficult design problems was creating a full-featured MMORPG that could be played and understood by kids as young as 8. Simplifying stats and streamlining progression were just the tip of the iceberg. Desc goes here. Rating: 4.57/5